I know, I know…I’ve been on radio silence lately, but I’ve been a little busy writing, editing and writing some more, and I’m thrilled to finally announce that I have two new releases – one out today, one coming soon!

First up is my first short story! SPRING AHEAD, a prequel to Help Wanted (Assignment: Romance book #2) tells the tale of what happens after Claire Nelson, a single-minded college senior with her sites set on eventually hitting the New York Times bestseller list, crosses paths with one Paul Mendez, a sizzling hot  smart-as-a-whip jock, on her way to get coffee one bleary eyed morning.

That my story is surrounded by 13 other shorts – cozy mysteries and romantic comedies – all written by amazing USA Today and NY Times bestselling authors I know you’ll love is icing on the cake. This anthology, titled PUSHING UP DAISIES, is available today!

The second new release is ORDER UP, the long-awaited book #5 in my Assignment: Romance series. The heroines of these stories each work at the fictional Chicago Gazette and this one features Nancy Braley, the Food section editor.

I have to admit, her story was not easy to write.

I think it had to do with the fact that, in previous books, I didn’t portray Nancy as an especially likable character. But the more I got into her head and crawled around in her skin, I was able to uncover that she had the same insecurities many of us do. After that, the story flowed like marinara sauce over homemade ravioli.

I hope you’ll find it was worth the wait! It releases on May 15th. Until then, here’s a synopsis to tide you over: 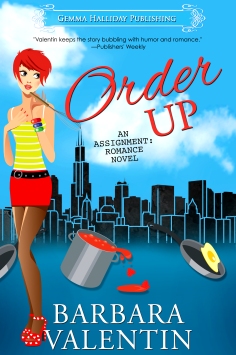 Nancy Braley is the Chicago Gazette’s food editor with a taste for hot chefs and talent for replicating their “secret” recipes. But when she finally gets up the nerve to ask out Doug Johnston, the steamy owner of a local café, she’s crushed when he says she’s not the “marriage material” he’s looking for.

Doug, perplexed by his attraction to Nancy whose take-no-prisoners personality reminds him way too much of his cheating ex, uses the only excuse he can come up with when she confronts him with an enticing invitation.

Not one to be deterred, Nancy becomes obsessed with figuring out exactly what “marriage material” means—partly because she doesn’t want to emulate her oft-married but divorce-settlement-wealthy mother, and partly because her attraction to Doug is driving her to distraction.

So when a married and very pregnant colleague gets put on bed rest until her baby arrives, Nancy volunteers to feed her family, hoping to get a first-hand look at what marriage is all about. And when Doug’s ex opens a new coffee shop nearby, stealing business from his café, it’s Nancy who comes to his aid! Eager to call Doug’s bluff, can she convince him she’s the real deal?

Be sure to pre-order a copy now!

This site uses Akismet to reduce spam. Learn how your comment data is processed.