My bestselling romantic comedies feature relatable heroines and the men who can’t help falling for them.

Nancy Braley is the Chicago Gazette’s food editor with a taste for hot chefs and talent for replicating their “secret” recipes. But when she finally gets up the nerve to ask out a hot local café owner, Doug Johnston, she’s crushed when he says she’s not the “marriage material” he’s looking for.

Doug is perplexed by his attraction to Nancy whose take-no-prisoners personality reminds him way too much of his cheating ex. To keep Nancy and his conflicted feelings at bay, he throws out the only excuse he can come up with—she’s just not marriage material.

Not one to be deterred, Nancy becomes obsessed with figuring out what exactly that means—partly because she doesn’t want to emulate her oft-married but divorce-settlement-wealthy mother, and partly because her attraction to Doug is driving her to distraction. So when a married and very pregnant colleague gets put on bed rest until her baby arrives, Nancy volunteers to feed her family, hoping to get a first-hand look at what marriage is all about. And when Doug’s ex opens a new coffee shop nearby, stealing business from his café, it’s Nancy who comes to his aid! Eager to call Doug’s bluff, can she convince him she’s the real deal? 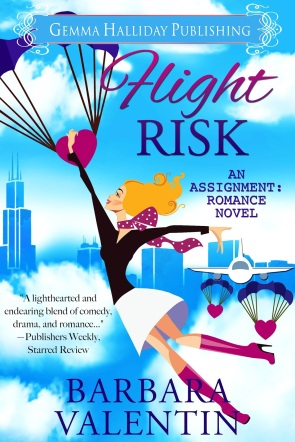 When Aubrey Thomas, a phobic travel writer, must choose between jumping to what she considers certain death from a skydiving static line or sinking even deeper into debt in the unemployment line, she scrambles to find someone—anyone!—who can help her overcome her debilitating fear of heights. Enter John Trelawney, a charming window washer who thinks nothing of dangling by a cable fifty stories up and claims he can cure her. Everything about John makes Aubrey nervous… including the way her heart kicks into overdrive whenever he’s around. But, at the end of her rope, she takes him up on his offer. Can he really help her get over her fear of heights? Or will Aubrey find herself free falling…possibly even in love with him? 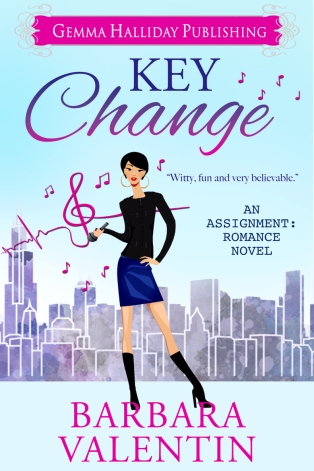 The first thing Sara Cleff, a hard-edged, shower-singing rock music critic, wants to do after following a band on tour is crawl into her nice comfy bed in her well-appointed, optimally located vintage apartment. But before making it home, she learns her roommate-slash-boyfriend has apparently broken up with her while she was away on assignment and sublet their apartment out from underneath her. Ouch! When her key no longer fits in the lock, the last person she expects to find on the other side of the door is Andrew Benet, a wickedly gorgeous music director from a nearby church.

Something about the brash music critic strikes a chord with Andrew, and he offers her the chance to stay on one condition—she has to join the choir at his church. While Andrew may hold the lease on Sara’s apartment, does he have the key to unlock her heart?

When Claire Nelson decided that her happily-ever-after lay not in marriage but in a spot on the New York Times bestseller list, she vowed never to tie the knot. But that was before she met Paul Mendez, handsome and charming enough to have her breaking said vow and marrying him shortly after college.

Almost fifteen years and four sons later, Claire is now a burned out breadwinner ready to ditch her quest for happily-ever-after, and Paul has traded his dream of chairing corporate board meetings for volunteering at PTA meetings as a stay-at-home dad. Feeling trapped in a demanding job, Claire’s repeated attempts to get Paul to return to work fall flat. Contemplating divorce, she drafts a letter to the Plate Spinner, a popular advice columnist, asking for help. But when the reply contains an offer that may just put her bestselling author dreams back on track, Claire’s only question is: will Paul be on board? Or does her charming husband make a surprise move of his own?

Mattie Ross is probably the last person who should be doling out good counsel to anyone on anything. Still smarting after being left at the altar two years earlier, she is strapped with debt, has sworn off men, routinely buries herself in her work and despite her well-proportioned figure, remains haunted by childhood taunts of “Fatty Mattie.” But to her publisher at the Chicago Gazette, and readers, she is their latest advice columnist, The Plate Spinner, a self-assured working parent to adorable fake children and multi-tasking savant. Enter Nick Derosa, the twin brother of Mattie’s cold-footed fiancé who is trying to get back on his feet after his brother steals his identity and implicates him in an illegal investment scheme. But thanks to Nick’s legendary running career, the publisher of the Chicago Gazette proposes a wager: If Nick can train an out-of-shape working parent in time to compete in the Chicago Marathon, he will contribute enough to help Nick launch his own non-profit running club for kids. Suddenly “Fatty” Mattie and Nick are thrust together as the most unlikely of pairs and under a deadline to put their trust issues aside and avoid another false start in their lives.